Weight-loss surgeons Richard Boorse, MD, and T. Daniel Harrison, DO, with LVPG General and Bariatric Surgery–1240 Cedar Crest, perform about 600 bariatric procedures each year. Of the weight-loss surgery options, one of the most popular is gastric sleeve. “This surgery helps people lose weight by restricting the amount of food they can eat and by lowering the main hunger hormone level, which then decreases their appetite. This combined effect leads to an average weight loss of 70 to 80 percent of excess body weight,” Boorse says. 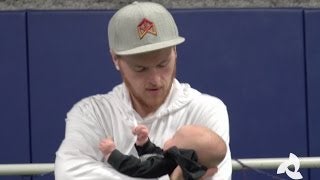 Tyler Krewson, 26, of Pennsburg admits he’s been overweight all his life. In high school, his size helped on the football field. But years later, the 5-foot-11-inch Krewson continued gaining weight, peaking at 440 pounds. After twin sons Koy and Koen were born in February 2015, his size prevented him from helping wife Krystal take care of the boys. “I couldn’t get down on the floor to play with them or put on their shoes,” Krewson says.

Ready to make a permanent change

Harrison felt Krewson was an excellent candidate for gastric sleeve surgery. “Tyler’s young, he didn’t have any pre-existing health conditions, and he was motivated,” Harrison says.

Preparing for surgery, Krewson met with a registered dietitian and behavioral health specialist. “I was an emotional eater. I had to learn how to control it,” he says. Now when somebody’s upset, Krewson and his family start doing a silly dance to avoid soothing with food.

The dietitian taught him a new way of eating too. Krewson lost 35 pounds before his January 2016 gastric sleeve surgery when he weighed in at 405 pounds.

Losing more than half his size

Post-surgery weight loss was almost immediate – he dropped another 35 pounds in the first month. Once he was cleared to exercise, Krewson began riding his bicycle year-round. In total, he lost 250 pounds and now weighs 190 pounds.

Though his job as a sous chef has him around food, he’s not hungry. In actuality, being smaller has an on-the-job benefit. “Everyone moves quickly in the kitchen, so being light on my feet is a huge bonus,” he says.

Being overweight forced Gina Burton of Slatington to take medical leave from her job as a warehouse picker. Her sides, legs and feet hurt too much. When foot surgery didn’t correct the problem, Burton, 30, figured losing weight might help.

Getting serious about her health

After attending a free information session where Boorse spoke about Lehigh Valley Health Network (LVHN) weight-loss options, Burton chose gastric sleeve surgery. The required preoperative nutrition and counseling classes helped Burton get serious about her new lifestyle. “I started cutting out soda and drinking more water,” she says. “I did research on low-carb meals and then decreased my portions of rice, pasta and starchy vegetables.”

At Burton’s weight-loss surgery in December 2014, the 5-foot-2-inch mother of two weighed 260 pounds and had a 58-inch waist. In the first six months, she lost 70 pounds. By the two-year anniversary of her surgery, Burton had lost 145 pounds. Today she maintains her weight at 125 pounds, with a 28-inch waist.

She’s active at work and at play

With the weight gone, Burton is back on her feet, working at Cedarbrook Nursing Home. She logs her steps, clocking between 15,000 and 25,000 steps in a shift. She also walks on the treadmill at the gym and lifts weights.

One of her happiest days was attending the Schnecksville Fair with husband Andre, son Jesiah, 11, and daughter Mariah, 8. “I never went on rides because I was worried the bar wouldn’t go down,” Burton says. This time around she rode with her family, and loved it.

Looking back, Burton would urge anyone considering weight-loss surgery to go through the LVHN program. “They teach you what you need to know to be successful.”