Anxiety is a feeling of worry, nervousness or fear. It's a normal feeling when a loved one is ill or a project you are working on is late. But when that anxiety spills over to everyday problems, or when it occurs every day, you could have an anxiety disorder.

Anxiety disorders are a type of mental illness characterized by severe anxiety that interferes with a person's life. Anxiety is an uncomfortable feeling of fear, uneasiness or concern that something bad is about to happen. It sometimes is accompanied by physical sensations such as heart palpitations, chest pain, shortness of breath, tension headache and nervousness. 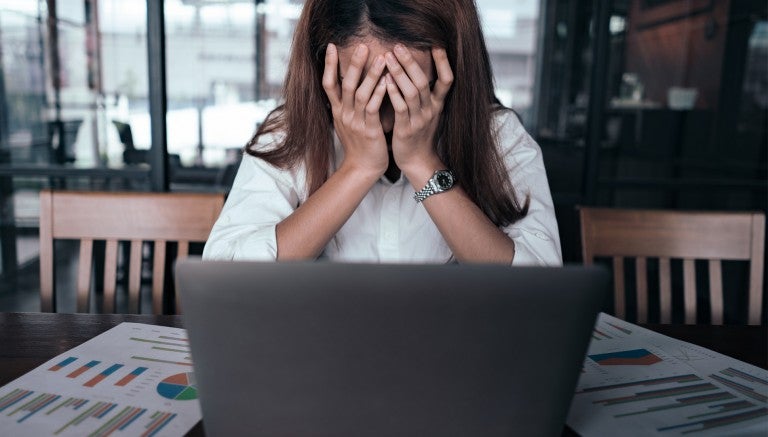 Difficulties such as poverty, early separation from a parent, family conflict, critical and strict parents, parents who are fearful and anxious, and the lack of a strong support system all can lead to chronic anxiety.

Some studies show that traumatic and stressful events – such as abuse, the death of a loved one, divorce or job loss – can bring on an anxiety disorder in vulnerable people.

Alcohol abuse and drug addiction also can bring on or worsen anxiety.

The primary symptoms of anxiety disorders are fear and worry. People with an anxiety disorder usually realize their anxiety is more intense than the situation warrants but cannot rid themselves of these irrational concerns. Anxiety disorders also are characterized by additional emotional and physical symptoms.

The following are the most common types of anxiety disorders and symptoms. However, each individual may experience symptoms differently.

Please note: Because anxiety disorder symptoms may resemble other physical or psychiatric conditions, you should see your doctor for a diagnosis.

Generalized anxiety disorder (GAD) is one of the most common anxiety disorders. People with GAD tend to worry constantly and continually anticipate disaster. They worry about their finances, their health, their job, world events and the future. Their worry often is out of proportion to reality. Generalized anxiety disorder begins gradually, usually in childhood or adolescence, but can begin in adulthood too. Depression in adolescence may be a strong predictor of GAD in adulthood. Depression commonly accompanies this anxiety disorder. It is more commonly seen in women and often occurs in relatives of those affected. Although GAD may be accompanied by depression, substance abuse or another anxiety disorder, impairment usually is mild. Generally, people with this disorder do not feel too restricted to be in social settings or a job. GAD affects about 5 percent of Americans in the course of their lives, and approximately 6.8 million American adults have it.

GAD symptoms include: Chronic, exaggerated worry, tension and irritability that appear to have no cause or are more intense than the situation requires. Physical signs, such as restlessness, trouble falling or staying asleep, headaches, trembling, twitching, muscle tension or sweating often accompany these psychological symptoms.

Panic disorder is characterized by repeated, unexpected panic attacks – episodes of sudden fear and feelings of danger or impending doom, along with physical symptoms. The illness may be accompanied by depression or other serious conditions because the effects on people’s lives are not just limited to the attack itself. Some people avoid everyday activities such as driving or shopping, for fear of experiencing a panic attack in a potentially dangerous setting. Others avoid any other environment where they had such an attack in the past.

Panic disorders symptoms include: Repeated, unexpected panic attacks – episodes of sudden fear and feelings of danger or impending doom, along with physical symptoms such as heart palpitations, chest pain, lightheadedness or dizziness, nausea, shortness of breath, feelings of imminent danger, shaking or trembling, choking, fear of dying, sweating, feelings of unreality, numbness or tingling, hot flashes or chills, and a feeling of going crazy. Panic attacks strike without warning and usually last 15-30 minutes. Since many panic disorder symptoms mimic those found in illnesses such as heart disease, thyroid problems and breathing disorders, people with panic disorder often make multiple visits to emergency rooms or doctors' offices, convinced they have a life-threatening illness.

People with OCD are plagued by persistent, recurring thoughts that reflect exaggerated anxiety or fears. Typical obsessions include worrying about being contaminated with germs or fears of behaving improperly or acting violently. The obsessions may lead an individual to perform a ritual or routine such as washing hands, repeating phrases or hoarding.

OCD symptoms include: Obsessive thoughts and ritualistic behavior. Common obsessions include constant, irrational worry about dirt, germs or contamination; nagging feelings that something bad will happen if certain items aren't in an exact place, position or order; fear that one's negative or blasphemous thoughts or images will cause personal harm or harm to a loved one; preoccupation with losing or throwing away objects with little or no value; and obsessive thoughts about accidentally or purposefully injuring another person.

Common compulsions include repeatedly washing one's hands, bathing or cleaning household items, often for hours at a time; checking and re-checking, several to hundreds of times per day, that the doors are locked, stove is turned off, hairdryer is unplugged, etc.; an inability to stop repeating a name, phrase or tune; an excessive, methodical and painstakingly slow approach to daily activities; and hording such as saving useless items like old newspapers or magazines, bottle caps or rubber bands.

Obsessions and rituals can substantially interfere with a person's normal routine, schoolwork, job, family or social activities. Many hours of each day may be spent focusing on obsessive thoughts and performing rituals, so that normal concentration and the performing of daily functions become very difficult.

Children also can suffer from OCD, but unlike adults, children with OCD do not realize their obsessions and compulsions are excessive and ritualistic.

Social anxiety disorder (SAD) is characterized by extreme anxiety about being judged by others or behaving in a way that might cause embarrassment or ridicule. This intense anxiety may lead to avoiding social situations. Performance anxiety (better known as stage fright) is the most common type of social phobia. Social phobia currently is estimated to be the third most common psychiatric disorder in the United States.

Social anxiety disorder symptoms: Extreme fear of being judged by others or behaving in a way that might cause embarrassment or ridicule. Specific SAD symptoms include blushing, sweating, trembling, nausea, rapid heartbeat, dizziness and headaches. Some people may have an intense fear of a single social or performance circumstance such as giving a speech, talking to a salesperson or making a phone call, but be perfectly comfortable in other social settings. Others may have a more generalized form of SAD, ranging from such behaviors as becoming anxious in a variety of routines, to clinging behavior and throwing tantrums. This intense anxiety may lead to avoiding social situations.

A phobia is an unrealistic or exaggerated fear of a specific object, activity or situation that in reality presents little to no danger. Common phobias include fear of animals such as snakes and spiders, fear of flying and fear of heights. In the case of a severe phobia, one might go to extreme lengths to avoid the thing feared.

Phobia symptoms: Specific phobias are characterized by strong, irrational, involuntary fear reactions to a particular object, place or situation. The reactions to these fears lead the individual to dread confronting common, everyday situations, or avoid them altogether, even though they logically know there isn't any threat of danger. The fear doesn't make any sense, but nothing seems to be able to stop it. When confronted with the feared situation, someone with a phobia may even have a panic attack.

PTSD can follow an exposure to a traumatic event such as a sexual or physical assault, witnessing a death, the unexpected death of a loved one or natural disaster. Researchers now know that anyone, even children, can develop PTSD if they have experienced, witnessed or participated in a traumatic occurrence – especially if the event was life-threatening.

PTSD symptoms: People with PTSD typically avoid situations that remind them of the traumatic event, because they provoke intense distress or even panic attacks. PTSD is characterized by three main types of symptoms, including: re-experiencing the trauma through intrusive distressing recollections of the event, flashbacks and nightmares; emotional numbness and avoidance of places, people and activities that are reminders of the trauma; and increased arousal including difficulty sleeping and concentrating, feeling jumpy and becoming easily irritated and angered.

Reminder: Because anxiety disorder symptoms may resemble other physical or psychiatric conditions, you should see your doctor for a diagnosis.