In the mid-1960s, when 30 cents bought a gallon of gasoline, first-class stamps were a nickel, and an average new home could be had for about $21,000, kidney transplant surgery was still in its infancy and survival rates were low.

Advances in kidney transplant surgery over the following decades, including anti-rejection drug advances in the late 1970s, 1980s and 1990s, have long since changed that scenario.

And since July 1991, Lehigh Valley Health Network’s (LVHN) transplant team has been transforming hope into reality, changing lives for patients with end-stage renal disease, giving them more tomorrows and a better quality of life. In 2020 alone, 112 kidneys were transplanted at LVHN.

LVHN’s kidney transplant program is one of the leaders in this region of the country, offering superior care and results for patients. For the past 17 years, LVHN also has performed pancreas transplants.

The secret to success

Michael Moritz, MD, LVPG Transplant Surgery, heads up the LVHN transplant program and says the goal is to perform kidney transplants for as many people as possible. That goal is met, says Moritz, because the transplant team and everyone involved in a transplant patient’s care works tirelessly in a culture dedicated to exceptional care.

“We’re not making decisions on whether something will be good statistically,” says Moritz. “Yes, we want to have good transplant outcomes, but we focus on getting the most from every donation and transplant opportunity. We’re performing twice as many transplants as national statistics predict we should based on the number of patients on our waiting list.”

Moritz has been a transplant surgeon since 1986 but says the surgeon’s role, while critical, is just one part of the overall success. The LVHN program is carried out by a large team consisting of transplant coordinators to nutritionists, nurses, social workers, nephrologists and much more. At LVHN, Moritz says, it’s a “well-oiled machine.”

“We work really hard. We sacrifice a lot of weekends,” he says, adding that playing such an important role in changing someone’s life is gratifying for the entire team. 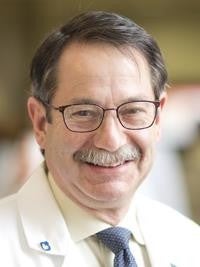 Sonja Handwerk has been an LVHN transplant coordinator for 20 years, working with living donors as part of her job and following up with donors after surgery. A living donor is someone who donates one of his or her kidneys to someone in need of a kidney who is a biological match. Donors can change their minds, but few do. Handwerk says just two have done so in her career at LVHN.

“It makes you realize there are good people in the world. We just don’t hear enough about them. It’s very emotional,” says Handwerk.

Susan Eckhart is a clinical post-transplant coordinator. A registered nurse, she’s been with the LVHN transplant program since the beginning. Recipients are monitored for life.

Eckhart, a recipient of two nursing awards in 2008, including the Nightingale Award of Pennsylvania for a clinical practice registered nurse, says she loves the personal connections with patients and their families. “To have such a devastating event for a family turn into someone living a healthier and longer life is pretty amazing, and I’m proud to be part of that,” Eckhart says.

Patrice Pfeiffenberger, transplant program director since October 2019, says everyone on the transplant team is there for the right reason – patient care. “All of that is a lot of work. You have to really be invested in what you do. It’s exceptionally rewarding. You’re literally giving people a second chance at life,” she says.

Pfeiffenberger has worked in other transplant programs and says LVHN’s program, with hundreds of years of combined experience among its staff, is a gem. “It is truly one of the most talented, if not the most talented team, I’ve ever worked with,” she says.

Moritz says LVHN’s transplant team culture looks to make patient care as seamless and effortless as possible. That comes from experience. “You walk into any component of this transplant program and you’re not going to be the first one there. Our staff knows how to take care of you,” he says.

For more information about transplants at LVHN, visit LVHN.org/transplant.