Stroke Recovery in the Cards for Schnecksville Man

We all notice certain things when we’re out on the road.

For Doris Hunsicker, one of those things was Lehigh Valley Health Network’s (LVHN) Mobile Stroke Unit. It was summer 2021, several months after her husband Tom’s first stroke, in November 2020. She saw the stroke unit on Route 309 and recalled being pleasantly surprised it existed. It stuck with her.

Fast forward several months. It was just over a year to the day after Tom’s first stroke. Tom and Doris were playing cards with friends in Whitehall when Tom’s head suddenly dropped to the table and his speech became incoherent. Doris instantly knew stroke had paid another unwelcome visit. She asked their friends to call 911 right away – and request the stroke unit.

The Mobile Stroke Unit arrived not long after the first responding ambulance.

Back at Lehigh Valley Hospital–Cedar Crest, Neurologist Adam Edwards, MD, with LVH Neurology–1250 Cedar Crest, was already gathering medical history on Tom and was able to access Tom’s medical records, including from the November 2020 stroke when Tom was treated at LVH–Muhlenberg.

“By the time he was in the ambulance, I knew his [medical] history,” Edwards says.

What’s in the Mobile Stroke Unit 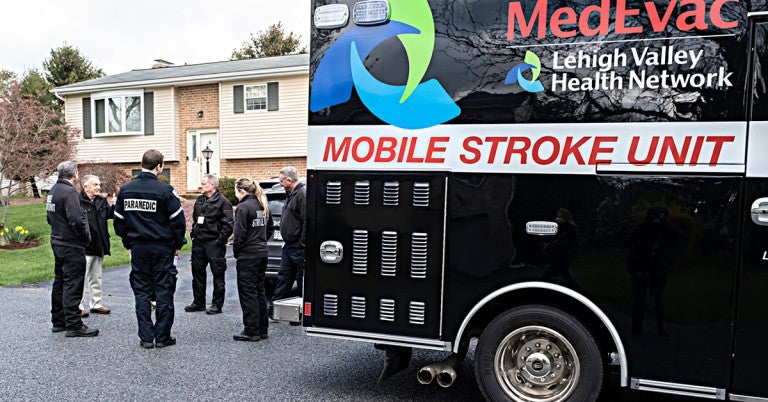 The stroke unit is equipped with a camera that doctors like Edwards at LVHN stroke centers can operate to monitor what’s happening and direct initial treatment. They have direct communication with the stroke unit crew, which also can perform a computed tomography (CT) scan so doctors can get a view of what’s happening inside the patient’s brain. Communication with doctors also provides information on which type of stroke center – primary or comprehensive – is best for the patient under the circumstances.

For Tom, 79, the CT scan pointed to the need for a clot-busting drug, and it was administered before he even reached LVH–Cedar Crest. “It’s like bringing the ER right to the patient,” says Mark Graber, CRNP, a certified registered nurse practitioner and pre-hospital registered nurse with the stroke unit. “The sooner you can open the clot up, the better. That’s the whole key. Getting treatment sooner helps reduce the potential for lasting effects.”

Not all strokes require clot-busting medication. In cases where there is bleeding in the brain, the situation calls for drugs to stop the bleeding.

For stroke victims, time is brain. Edwards said 30,000 brain cells die every second they are deprived of oxygen-rich blood. It’s estimated the brain has about 86 billion nerve cells and billions of other types of cells. In Tom’s case, he received the clot-busting medicine about 42 minutes after the onset of his symptoms and within 20 minutes of the mobile stroke unit’s arrival. “Those are amazingly great times,” he says.

Both Doris and Tom were impressed with the stroke unit and the results. “I was amazed,” says Doris.

Edwards says calling 911 is the right thing to do to get stroke victims help faster. “Never, ever try to drive them [stroke victim] to the hospital,” Doris says. “Get an ambulance. That is number one.” The Hunsickers are grateful for the mobile stroke unit and Tom’s care at LVH–Cedar Crest, a comprehensive stroke center.

The brain has about 86 billion nerve cells and billions of other types of cells.

The stroke unit was the first in Pennsylvania when it debuted in 2019. Graber said the only other mobile stroke unit in the state is based in Philadelphia. The Hunsickers say they find many people don’t know about it and are eager to spread the word.

However, it is important to note that the unit does not operate everywhere within the LVHN footprint.

It currently has agreements with and assists on stroke calls with Cetronia, Lower Macungie and Boyertown ambulance companies. While the resulting response area is fairly large and includes Whitehall where the Hunsicker’s were playing cards, it does not include Schnecksville, where the Hunsicker’s live.

Doris recalled checking the couple’s will as she got ready to visit Tom in the hospital the following day. When she and their daughter walked into his room, he plainly said, ‘Hi, how are you?’ Doris was stunned. “I didn’t know what I would find. We were in shock,” she says. “They were excellent with him.”

Tom recalled being on a gurney in the stroke unit and seeing and hearing Edwards on a video screen. “I really think it’s first class,” he says.

Tom’s first stroke affected his balance and ability to walk, and he underwent rehabilitation. He recalled seeing other patients in rehabilitation where strokes left them without the use of their hands or limbs. “I felt very fortunate, on this second stroke, to come out of it like I did. I was fortunate to be in the right place,” Tom says, adding the second stroke affected the other side of his brain from the first. He was discharged home after three days and is doing well.

The last two Novembers haven’t been kind to him from a health perspective and to use a card term, he and Doris aren’t hoping for three of a kind. “We’re not looking forward to November this year,” says Doris with a nervous chuckle.