When he suffered his first pulmonary embolism, Jeremy Kube said it felt like he was underwater, unable to catch his breath, no matter how hard he tried.

Living in New Hampshire at the time, the former emergency medical technician and volunteer firefighter found himself critically ill. Sweating profusely and stressing his heart, he went through several bags of intravenous fluid just during the ambulance ride to the hospital, where he eventually spent 13 days, including several in the intensive care unit. “It was bad,” he says.

Fast forward 11 years. Kube (pronounced cue-bee), a fire protection engineer, is living in Bethlehem. When he woke on March 9, 2022, his right calf hurt, and he thought he had pulled a muscle. His wife, Mary, used a massager on the calf to try to give him some relief. She went to work and Kube left to conduct a fire protection inspection at a high-end shopping center in northern New Jersey, not far from New York City.

In need of help, far from home

“I was about halfway through the survey and there were a couple property managers with me. I was pointing out what was needed, and I suddenly couldn’t breathe,” he says. “I could catch my breath when I sat down. If I sat still, I was fine.” Despite having difficulty breathing, he finished the survey and even drove to the next survey location. There, he could barely climb three steps.

Pulmonary embolism is a potentially life-threatening condition that affects 1 in 1,000 people in the U.S. each year.

At that point, Kube says, he strongly suspected another pulmonary embolism, a condition where a blood clot breaks loose and travels to the lungs. This clot broke free in a vein deep in his right calf, the same calf connected to his prior embolism.

“I was extra scared the second time around,” he says. “I didn’t know what I had for sure. I suspected at least a small one [pulmonary embolism]. I knew I needed urgent care.”

Kube, 45, debated what to do. He didn’t want to go to a hospital he didn’t know in an unfamiliar community, especially a very large hospital where he feared he’d just be a number. Since he could breathe when he was seated, he decided to make the drive home.

“All of my family wanted to hang me because I drove home,” he says. Once back in the Lehigh Valley, he went to his wife’s workplace, then to Lehigh Valley Hospital (LVH)–Muhlenberg.

At LVH–Muhlenberg, Kube was evaluated, stabilized and put on a blood thinner for the clot in his lungs. Pulmonologist Brian Burlew, MD, was consulted and, after evaluating Kube, contacted interventional radiologist Mitchell Storace, MD, to discuss the treatment plan. 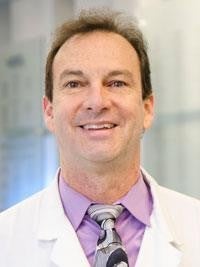 Pulmonology
Make an Appointment
“The whole team was so compassionate. It’s not every day someone has an idea of what you’re going through and wipes your tears away and tells you it’s going to be OK.” – Jeremy Kube 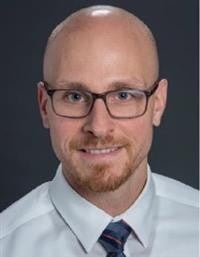 Kube had two options. The first was to simply remain on a blood thinner, allowing his body to slowly break down the clots over time. This would likely mean a longer recovery time, during which his heart could sustain additional damage from pumping against the back pressure of the clotted vessels. The long-term effects of having large blood clots in the lungs remain largely unknown.

Kube remembered the months-long road back from his first pulmonary embolism and chose the thrombectomy intervention, knowing that with any invasive procedure comes risk. In this case, among others, were risks of bleeding, infection, and injury to the heart or pulmonary vessels.

Later the same day, over the course of about two hours, Storace and his team cleared nearly all pieces of the blood clot from the blood vessels in Kube’s lungs.

Successful surgery and some tears

Kube was minimally sedated during the procedure, so he was awake and able to understand what was happening. “When I saw what they took out of me, I burst into tears,” Kube says. “To see my own mortality right before my eyes, it hit home for me. It hit hard. I was not expecting that.”

As the procedure continued, Kube’s emotions continued to run high, and the tears continued to flow. “This wonderful nurse would come along every few minutes and dry the tears,” he says. “The whole team was so compassionate. It’s not every day someone has an idea of what you’re going through and wipes your tears away and tells you it’s going to be OK.” Kube says the team worked seamlessly, knowing just what to do and when to do it, often without conversation.

There were no complications, and Kube was out of the hospital in 2½ days and back to work about two weeks later. By the time he was discharged, he says, he was able to walk laps around LVH–Muhlenberg. He credits advanced technology and the skill of Storace and the entire interventional radiology team for his great outcome. He says he’ll be on blood-thinner medication the rest of his life.

“I’m so glad I didn’t go to just any hospital in northern New Jersey,” Kube says. “There was no guarantee any of those hospitals would have had this procedure. If I had done so, I could still be recovering. It was great to know my life wasn’t going to be as dark as it was the first time around.”

“Interventional treatment for pulmonary embolism is an area of very active ongoing research,” Storace says. These procedures are not performed in all cases of pulmonary embolism, and the decision of how to treat is best made by a multidisciplinary team that includes pulmonologists and interventionalists. In this case, Burlew identified Kube as a higher-risk patient who could benefit from an intervention.

Burlew said he was brought into the Kube case by hospitalist Nazih Nassar, MD, who was on duty when Kube came to LVH–Muhlenberg. “There are times when a pulmonary embolism patient’s care is totally managed by the hospitalist,” Burlew says. “In this case, there were a lot of blood vessels clogged with clots, a large clot burden.”

The stress on Kube’s heart was apparent through testing that included blood tests for proteins troponin and brain natriuretic peptide. Both are produced with the heart must work harder to pump blood.

Burlew says he was astounded by the number of clots removed from Kube’s lungs and notes the interventional procedure used for Kube, when called for, is a game changer. “No matter which course of treatment is selected, patient safety is the highest priority,” says Burlew.

Storace says the LVH–Muhlenberg interventional radiology team and support professionals are an “amazing” group of individuals who display a rare combination of skill, knowledge, experience, and compassion.

“The hospital is an incredibly busy and hectic work environment. The most successful treatment teams consist of people who can do their job very well while consistently maintaining primary focus on what is best for the patient,” Storace says. “That seems obvious, but it’s really one of the challenges of this field. Anyone who has worked in a hospital knows how easy it can be to lose perspective. I love working with the LVH-Muhlenberg interventional radiology team because they accomplish this extremely well.”

Storace says patients are helped every day but notes there are moments – such as Kube’s case – where everything just comes together. “It’s a special moment,” Storace says. “ Making someone feel better so quickly by taking away a very real and dangerous problem is an amazing feeling.”