“Doctors and nurses always blamed the machine, and I assumed they were right,” she says.

Since she has fibromyalgia, she thought fatigue and shortness of breath also were related to that. She had no prior indication that anything serious was wrong with her heart until an appointment with her doctor in early 2014. When nurses tried to take her blood pressure, they struggled to get a reading. When her physician came in, Dadarria advocated for herself and asked for a manual reading. And immediately, her doctor thought something was off.

“He listened and thought he heard something odd and sent me for an EKG (electrocardiogram). I had no chest pain, and at 50, I thought I was too young to have heart problems,” she says.

However, more tests showed that something was very wrong: She was diagnosed with left bundle branch block, an electrical conduction problem in the left ventricle. Her cardiologist, Ronak Patel, MD, with LVPG Cardiology, told her that her heart pumping function was at 16%, but it should be in the 50-70% range. This low function showed she was in heart failure.

Patel created a personalized plan to help Dadarria, starting with medication. “When Nikki first came to me, we started her on goal-directed medical therapy. This is a thoroughly studied combination of medicines that have shown to improve heart failure and potentially prolong life,” Patel says. “We started her on a beta-blocker, ACE inhibitor and diuretics to help her feel better and allow her heart function to get stronger with time.” 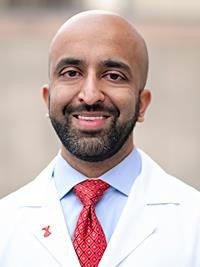 Cardiology
Make an Appointment
“We followed guidelines, put her on appropriate medical therapy and put in a defibrillator, all of which have led to her treatment success. We have a close doctor-patient relationship, and I believe this is part of the reason why she has done so well.” - Ronak Patel, MD.

However, after a few months on the medications, her heart function did not improve significantly. Patel recommended that she have a defibrillator implanted.

“Studies have shown when a patient's heart function is below a certain level, they are at higher risk for lethal heart arrhythmias,” Patel says. “Because of this, we put in a defibrillator to reduce her chances of sudden cardiac death from one of these lethal arrhythmias.”

On May 12, 2016, Dadarria received an implanted defibrillator.

Defibrillator does its job

Dadarria continued to take medication after receiving the defibrillator and was feeling better. However, in 2018, she suddenly fainted at work.

“I went into VFib (ventricular fibrillation) when I was at work,” she says. “I got super dizzy and passed out, out of sight of my co-workers. When I woke up, I went to find them. I told my colleagues, who were nurses, that my shoulder was killing me, and they suspected my defibrillator had gone off.”

She checked in with Patel, who confirmed her defibrillator had gone off.

“She had an episode of ventricular fibrillation detected by her defibrillator, which quickly shocked her out of the lethal rhythm and saved her life,” Patel says.

A normal life with defibrillator

Since then, her heart function has been back to normal. Dadarria explains that her defibrillator receives remote check-ins at night, while she sleeps. She also has an appointment every six months with Patel to make any adjustments and check in.

“My heart function is now up to 60%, higher than it ever was my whole life,” Dadarria says. “With my defibrillator I get to take care of my grandkids and travel. I can do anything I want to do.”

She credits Patel for saving her life, and they have formed a close bond.

“Nikki is one of our special patients. It has been very satisfying to treat her heart failure and see her get better and live a normal life,” says Patel. “We followed guidelines, put her on appropriate medical therapy and put in a defibrillator, all of which have led to her treatment success. We have a close doctor-patient relationship, and I believe this is part of the reason why she has done so well.”

And his care has meant the world to Dadarria.

“I trust Dr. Patel so much. He is the sweetest man, and he will see me for any reason. He will coach me, console me, and is always very honest and forthright with what's going on. He’s been fabulous this entire time,” she says.

Schedule an appointment with your primary care doctor