Hip pain is gone after joints were replaced

One night in 2016 when Michael Parra was at a nightclub playing guitar with his band, he finally realized he needed help.

“Just standing there rocking ’n’ rolling for a long period of time was really painful on my right side,” says the 60-year-old Kunkletown musician. “I originally felt a sharp pain there while competing in motocross [off-road motorcycle racing] a couple of years before that. I had put off seeing a doctor about it, but I had reached the point where I couldn’t put it off anymore.”

“Hip replacements are No. 1 in terms of patient satisfaction in orthopedic surgery,” Ferrante says. “Michael had some arthritis that was causing the pain in his right hip. Given his active lifestyle, I had the feeling we’d be seeing him about the other hip eventually. Arthritis in one hip often means arthritis in both.” 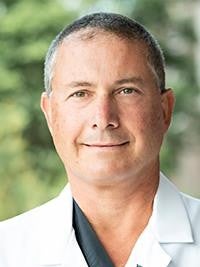 Hip No. 2 and rehabilitation

When Parra began feeling discomfort on his left side, he didn’t hesitate to get it checked out. He had his left hip replaced by Ferrante in August 2021. Following both surgeries, Parra went through rehabilitation with physical therapist Richard Martinetti, rehabilitation manager at Lehigh Valley Health Network–Brodheadsville.

“Rehabilitation is not just about treating the joint, but treating the whole person,” Martinetti says. “Michael plays guitar, restores and races cars, once competed in motocross – he’s the definition of an active person. Rehab for him would be geared to take that into account.”

Parra was up walking in the hospital the day after his surgery. His first rehab session was just after he got out of the hospital two days later.

“Rich was great to work with,” Parra says. “I played football in my younger days, did motocross for 12 years, and still do a lot of the same kinds of things with my son. I mean I couldn’t even carry my guitar cases before my surgeries. Now I feel so good, sometimes I overdo it. I’ve had to learn to be more careful.”

Martinetti designed an individualized treatment program for Parra that included stretching, working on an exercise bike and weight training twice a week for 11 weeks before issuing him an exercise program to do on his own. Parra says he’s given up motocross but gotten into autocross instead. He’s building his own music studio at home and has started writing and producing original works. He has no plans to slow down.

“I’ve been a physical therapist for 26 years and I’ve seen amazing advances in surgical techniques and patient outcomes,” Martinetti says. “Today, there really are minimal restrictions after hip replacement surgery.  Of course, it important to work with your surgeon and therapy team to understand your unique recovery plan, but life can return to normal fairly quickly for the average person.”

Parra recommends hip replacement surgery to anyone experiencing the pain he was feeling.

“I connected immediately with Dr. Ferrante and had compete confidence in him,” Parra says. “The pain is gone and I’m back to living my life again.”

A full team of specialists that can get you back on your feet with the most comprehensive orthopedic care in the region.