When their infant son, Alex, failed the hearing portion of his newborn screening five years ago, Tabitha and Josh Barnes were shaken. They hoped it was something temporary, like excess fluid in his ear canals.

But when Alex failed subsequent audiology tests, the Saylorsburg, Pa., couple had to confront their worst fears: Their baby had profound hearing loss in both ears.

The heartbreaking impact of living without sound showed up early when Alex failed to start speaking normally. "At 2 he only said a few words, like 'Da' or 'No,'" Tabitha says. "Often he'd just point at things he wanted and grunt."

Even with speech therapy and hearing aids (which were delayed until he was 2 because of potential complications from an unrelated congenital brain condition called agenesis of the corpus callosum), Alex couldn’t communicate effectively and began acting out.

"With his level of hearing loss, hearing aids made it sound like he was in a fishbowl – he was extremely frustrated and screamed a lot," says Tabitha. "He'd try telling us something, but we couldn’t understand him, and he couldn’t understand us. There was lots of crying on his part and mine."

Discouraged by his limited progress, the family met with Lehigh Valley Health Network (LVHN) audiologist Alicia Kittle, AuD, in January 2018 when Alex was 3. "We determined he had sensorineural hearing loss caused by a damaged cochlea (an inner ear structure that translates sound vibrations into electrical impulses that are carried by the auditory nerve to the brain for processing)," she says. "We decided to evaluate him for a cochlear implant."

Unlike a hearing aid, which amplifies sound, a cochlear implant bypasses the cochlea to directly stimulate the auditory nerve. The implant has two parts: an external device worn behind the ear to detect and transmit sounds and a nearby receiver implanted under the skin that sends those sound signals through wires to the auditory nerve and brain.

In preparation, Kittle thoroughly tested Alex’s auditory system to determine exactly what he heard. Alex also underwent an MRI to verify he had the necessary ear structures for an implant, including a cochlea and an auditory nerve. "Fortunately, Alex's wiring was all there," Chennupati says.

In March 2018, Alex received a cochlear implant in his left ear. It was activated four weeks later. "We gradually turned it up, but at one point it got too loud, and Alex started crying," Kittle says. "That’s common – it can be scary at first. Alex was without hearing for three-and-a-half years and suddenly we're giving him sound."

Once adjusted, Alex’s look of quiet gratification said it all. "It wasn't a 'wow-I-can-hear-your-voice' look," says Tabitha. "It was more subdued, like, 'Yeah, this is good.'" 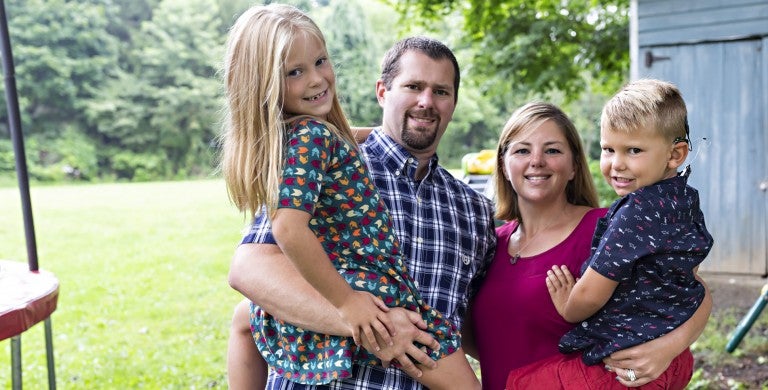 Today, Alex is speaking in full sentences. He loves baseball, swimming, playing with friends, and was recently accepted into mainstream kindergarten.

"He's matured unbelievably," says Kittle. "I'd consider him a normal 5-year-old." Chennupati credits Alex’s parents for his remarkable progress. "They did it all, diligently taking him to follow-up visits and speech therapy after surgery," he says.

For Tabitha, Alex’s transformation is nothing short of miraculous. "All I wanted was for my child to hear me tell him I love him," she says. 'I never imagined it would go further. I’m so happy we put our trust in Dr. Chennupati and Dr. Kittle, who made all this possible. Our goal now is making sure
Alex lives his best life so he never feels like he has a deficit."

LVHN has the area’s only pediatric surgeons.

We offer state-of-the-art care for routine to complex surgical conditions.