As COVID-19 cases rise across the country, we are seeing longer wait times. It’s important to know where you should go for your urgent medical concern.

Learn about third shots and booster shots, and how they can help you during the pandemic

The medical community has come a long way in understanding the risk factors for severe illness from COVID-19. One of the greatest risk factors is having cancer.

“All major medical societies, including the Centers for Disease Control and Prevention (CDC), have noted that patients with cancer are in a higher-risk category for severe illness,” says hematologist/medical oncologist Ahmed Nadeem, DO, with LVPG Hematology Oncology–Muhlenberg. “Many cancers and their therapies can weaken the immune system, decreasing its ability to fight viruses effectively. This, in turn, can lead to severe illness.”

With close to 2 million new cancer cases expected to be diagnosed this year, many individuals will find themselves at higher risk for COVID-19 than before. 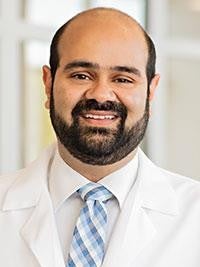 Hematology/Medical Oncology
Make an Appointment
If you are undergoing cancer treatment, there are a few steps you can take to reduce your risk for infection and severe illness from COVID-19.

Getting the COVID-19 vaccine is the best way to prevent infection and protect yourself and those you love from severe illness. However, there may be optimal times for cancer patients to receive their vaccine (especially if they are currently receiving treatment).

“Guidelines have changed throughout the pandemic, but overall, we highly recommend that cancer patients get vaccinated,” Nadeem says. “If you are unsure about the best time to get your vaccine as a cancer patient, the best thing to do is contact your oncologist. Depending on your cancer diagnosis and the type of treatment you are receiving, there may be times when getting the vaccine will be most effective.”

Third shots can help, if your immune system is compromised

While receiving the initial vaccine series is a great first step, individuals age 5 and older may need a third shot of either the Pfizer-BioNTech or Moderna vaccine 28 days after their last dose (depending on which vaccine they initially received). No data have supported an additional shot for those who received the Janssen/Johnson & Johnson vaccine.

“Getting a third shot provides even more protection for moderately to severely immunocompromised individuals,” Nadeem says. “When your immune system isn’t working properly, it may not provide the initial level of response that we want to see. The third shot is given to improve your response to your initial vaccine series.”

You may be eligible if you:

If you fit into these categories, or if you are unsure, you should speak to your oncologist before signing up for a third shot.

Booster shots are important too

If you have cancer and are not considered moderately or severely immunocompromised, you are eligible for a booster instead of a third shot.

Those eligible for a third shot should get a booster as well (five months after receiving their third dose).

“While third shots improve your response to your primary vaccine series, the booster shot restores your protection against COVID-19 as it decreases over time,” Nadeem says. “As new variants emerge, we are finding that boosters are incredibly important for the entire population, but especially those who are at an increased risk for severe illness.”

While restrictions and safety protocols have relaxed nationwide, people undergoing cancer treatment may want to continue:

“We know that the pandemic has been difficult for everyone, and while we have made major advances toward fighting COVID-19, it’s still incredibly important to take precautions to protect ourselves,” Nadeem says. “This is especially true for cancer patients and those who take care of them.”

You may have questions about their safety and effectiveness. We have the answers.

Get the vax facts