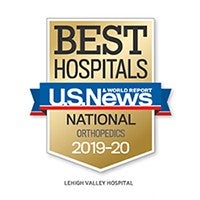 Lehigh Valley Hospital (LVH) is once again the region’s only nationally ranked hospital on U.S. News & World Report’s Best Hospitals list. LVH ranks 35th among the nation’s leading hospitals in orthopedics. It’s the ninth time we were nationally ranked for orthopedics. The recognition places LVH among the nation’s top 3 percent of leading hospitals in this specialty.

For the third straight year, LVH also ranks in the top five among all Pennsylvania hospitals and is high performing in four specialties:

LVH also is listed as high performing in these seven common adult procedures and conditions tracked by U.S. News:

Other LVHN hospitals also were recognized by U.S. News.

For the 2019-20 rankings, U.S. News evaluated more than 4,500 hospitals and health systems nationwide in 16 specialty areas. Only 165 were ranked in at least one specialty. LVH is one of them.

The U.S. News Best Hospitals methodologies in most areas of care are based largely or entirely on objective measures such as risk-adjusted survival and readmission rates, volume, patient experience, patient safety and quality of nursing, among other care-related indicators.