When a mammogram revealed a suspicious lesion, Joan Zaharakis was in the process of moving from Long Island to East Stroudsburg.

“My son, Alex, said, ‘I want you to come to LVHN – I know good people there.’” His knowledge came firsthand: “He works as a radiation physicist at Lehigh Valley Topper Cancer Institute where Joan would be treated,” says surgical oncologist Lori Alfonse, DO, with LVPG Surgical Oncology. “He’s very smart and takes care of breast cancer patients all the time.”

Having Alex on hand comforted Zaharakis. “Without him, I would have been more nervous,” she says. “He was there for my surgery and radiation treatments, and has a good rapport with the whole team. It was a blessing.”

Zaharakis’ cancer was small, and surgical follow-up was limited to radiation and medication. “The challenge was that we were treating her left side, where radiation could harm the heart,” says radiation oncologist Jeanette Blauth, MD, with Allentown Radiation Oncology Associates. Alex knew the risk. “He said to me, ‘How long can you hold your breath?’” Zaharakis says. A form of advanced treatment called deep inspiration breath hold involves taking a deep breath and holding it to pull the breast or chest wall away from the heart as radiation is administered.

“It significantly reduces radiation reaching the heart,” Blauth says. Alex carved time from his schedule to attend meetings about his mother’s care, offer insight and
relay information to family. Zaharakis in turn treated the entire care team like family. “She made the most awesome Greek lemon desserts you can imagine,” Alfonse says. “Alex was right about the people,” Zaharakis says. “Everyone at LVHN was remarkable, they really were.”

Where’s the mammo coach going next? 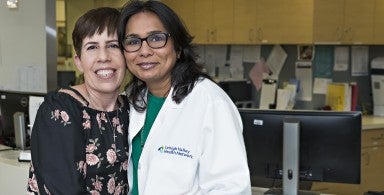