Rick Henrick got the mulligan of a lifetime at Brookside Country Club last fall, but it had nothing to do with a second chance after a bad golf shot.

He got a do-over at life.

After cutting his round short because he wasn’t feeling well, his heart stopped in the club’s parking lot when a “widow-maker” heart attack struck, stopping his heart.

Though the survival rate for out-of-hospital cardiac arrest is less than 10%, Henrick was one of the lucky ones. Like a tee shot that bounces off a tree back onto the fairway, good fortune was with him that day.

From the automated external defibrillator (AED) at the club, to the quick response from club employees and the nearby Macungie Ambulance Corps to expert care at Lehigh Valley Hospital (LVH)–Cedar Crest – all aligned in Henrick’s favor. The active 66-year-old trucking company sales director from North Catasauqua is back at work, back on the course and back to living life.

“We were happy we did all we could do as quickly as possible. It makes it all worthwhile to know that you at least have some training and some ability to know what to do if something like that happens.” – David Fields, head golf professional, Brookside Country Club.

Henrick and Paul Heffner are best friends and have known each other for nearly 50 years, going back to their baseball playing days in the Blue Mountain League. They’ve been golfers for decades. On Sept. 15, 2021, they were playing in a member-guest tournament at Brookside, where Heffner, of Lower Macungie Township, is a member.

Henrick started the day with a workout and a swim, then headed to the golf course for the tournament.

As they approached the ninth hole, Henrick says he wasn’t feeling well, but didn’t want to leave for the day and inconvenience his playing partners. He didn’t play the 10th hole and Heffner made sure he had water and a towel soaked with ice water.

Henrick started playing again and parred the next two holes.

Then he started feeling worse and he asked someone from the course pro shop to come out and get him so his group wouldn’t have to leave the course to take him back to the clubhouse.

Brookside’s head golf professional, David Fields, says he took a cart out on the course and came back with Henrick, who spoke of some chest area discomfort. “He (Henrick) was unsure what was going on,” Fields says. Henrick told Fields he had no prior heart issues. At that point, Fields says, there was no reason to think “it was anything other than the sun.”

Before heading into the clubhouse, Henrick asked if they could drop his golf clubs off at his pickup truck. They were going to get Henrick inside where it was cooler, where he could get more water and something to eat.

Fields put Henrick’s golf clubs into the back of Henrick’s truck, but when Fields walked around the front of the truck, he found Henrick slumped over in the golf cart. “I checked him and at that point, it was clear to me he had just had a massive heart attack,” Fields says.

Fields yelled for someone to get then Brookside general manager Michael Kuebler and immediately called 911. He drove Henrick to the front of the clubhouse and was met there by Kuebler.

Kuebler and Fields got Henrick off the golf cart and onto the grass and Kuebler started hands-only CPR. Kuebler, says he directed another employee to bring one of the club’s AEDs. They continued CPR, used the AED once, then continued CPR. Brookside provides annual CPR training for its employees.

Kuebler says everyone was in the right place at the right time that day. “It was a team effort,” he says. “I like to think I would have done what anyone else would have done in that situation. Rick and his family were my number one thought the whole time.”

Macungie paramedics quickly arrived and started assisting Henrick. “They had some high-powered stuff. They knew what to do when they got there,” Fields says, adding Henrick left the country club unconscious, but with a pulse.

“We were happy we did all we could do as quickly as possible,” Fields says, adding the club provides CPR training to employees. “It makes it all worthwhile to know that you at least have some training and some ability to know what to do if something like that happens,” he says.

Heffner heard the ambulance sirens while he was still out on the course and knew something was wrong. He called the clubhouse and was told to come right in. Something had happened to his friend. He arrived to see the Macungie paramedics working on Henrick. “I thought my best friend had died right in front of me,” Heffner says, his voice cracking with emotion.

Henrick arrived at LVH–Cedar Crest with his heart functioning at just 20% capacity, says Shailendra Singh, MD, Co-Director of Interventional Vascular Cardiology at Lehigh Valley Heart and Vascular Institute. The hospital was alerted that a possible heart attack patient was en route to the emergency room based on an electrocardiogram transmission sent directly from the road by Macungie Ambulance staff. The Pre-Hospital MI Alert is a program that alerts the hospital team to an incoming myocardial infarction (MI) – heart attack – patient. Singh, the interventional cardiologist on duty that day, was ready and waiting as were emergency room staff. 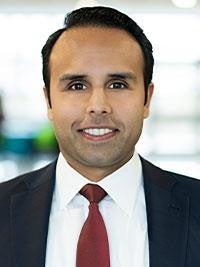 Tests showed his left anterior descending artery was 100%  blocked, which caused his cardiac arrest. A cardiac arrest caused by a heart attack involving this blood vessel is commonly referred to as a “widow-maker” because of the high mortality rate, especially in cardiac arrest that occurs outside the hospital.

Singh spoke with Henrick’s wife of 35 years, Diane, by phone. He explained he wanted to get her husband into the cardiac catheterization lab as soon as possible. Unless they moved quickly, Henrick stood little to no chance. She told him to do anything and everything he had to do to save her husband.

Singh immediately decided to open a vacant operating room within the cardiac catheterization laboratory to speed up the start of Henrick’s procedure. Henrick was on the operating table within 20 minutes of arriving at the emergency room. Working quickly, Singh installed an Impella® heart pump, the world’s smallest, to temporarily assist Henrick’s weakened heart. He cleared the blockage in Henrick’s left anterior descending artery and inserted a stent to keep the blood vessel open. As part of his treatment, Henrick also underwent targeted temperature management (formerly called therapeutic hypothermia) to ensure brain function recovery.

As Henrick was being transported to the cardiac intensive care unit after Singh cleared the blockage and installed the heart pump, Heffner says he joked with Henrick, saying “If you think you’re getting any more strokes from me just because you had a heart attack ...” Henrick, who was sedated, didn’t hear him then. But as friends will do, Heffner told him about it later.

“He’s doing great,” Heffner says. “You would never know he had a massive heart attack.”

“We were very fortunate and blessed in part because the cardiac arrest occurred at a place equipped with an AED and people who immediately began to perform high-quality CPR,” Singh says. “The proximity of the golf course also helped tremendously since it was within several miles of EMS and the hospital.”

Even after successful resuscitation and optimal interventional treatment for cardiac arrest due to a heart blockage, more often than not, there remains some degree of weakened heart muscle. Singh says another remarkable part of the story is how quickly Henrick’s heart rebounded. The volume of blood Henrick’s heart was pumping out his left ventricle with each heartbeat improved to 60% within six days, up from the original 20%. Normal ranges from 50-70%.

“He walked out of the hospital with completely normal heart function, which is only possible with quick, precise action and very high-level cardiovascular care,” Singh says.

Singh says acutely critical cases like Henrick’s are always a team effort, with everyone doing their part to save a life. “It’s an incredible honor and privilege to be a part of this team. I am extremely proud of all our first responders, doctors, nurses, and staff for their continued dedication and hard work in caring for our community,” he says.

Henrick says it was a “perfect storm” of events that day that gave him his second chance.

Henrick doesn’t remember a lot about that day at Brookside. He says he never had chest pains before, and was never short of breath or dizzy, even at the gym. He does have some family history of heart disease and was taking medication for elevated cholesterol.

His first memory was waking up in the hospital after seven days and being told by his wife he was there because he had suffered a heart attack. He says during the first few days he was hospitalized, “it wasn’t looking very good.” But he recovered and even made some work calls from his hospital bed. He was discharged from the hospital on Sept. 29.

Henrick says many people, including coworkers and friends, sent wishes for a speedy recovery, but adds the most positive person through it all was his wife. “She made such a difference,” he says.

“I can’t say there would have been anybody better to treat me than Dr. Singh,” Henrick says, adding Singh was extremely meticulous and thorough, always taking time to clearly explain everything and answer all his questions

Life after such a traumatic event is the same in some ways, different in others. “I don’t take anything for granted anymore. I think we all take things for granted,” Henrick says. “Every day, I’m glad to be here.”

Heffner is thrilled his best friend is still alive and hitting the links again. They can still call each other nearly every day like always.

“I do believe in a higher being, in God,” Heffner says. “He (God) helped Rick through this, I know that.”