Don’t Put Off Your Colonoscopy

Lifesaving screening can begin at age 45 (or earlier, if needed)

At age 50, Gale Fritsche did something only two out of every three people his age do – and it ultimately saved his life.

He underwent a colonoscopy. It revealed stage 3 colon cancer, which had grown through the wall of his colon and spread to his lymph nodes.

“I had zero symptoms. I’d never smoked. I ate a healthy diet. I’ve always exercised,” says Fritsche, who has run the New York and Boston marathons and is also an avid cyclist. “The first thing that hit me was a fear of dying. I knew my odds for survival were decent, but it was always in the back of my mind.”

Fritsche, of Upper Macungie Township, is one of many people who notice no symptoms as the condition progresses. That’s one reason colon cancer screening is so important, says Fritsche’s hematologist oncologist, Usman Shah, MD, with LVPG Hematology Oncology.

“If you find the polyp before it is cancerous, it can be removed early, greatly decreasing the risk for cancer developing at all,” Shah says. Cancer screening is now recommended by the U.S. Preventive Services Taskforce for people starting at age 45. 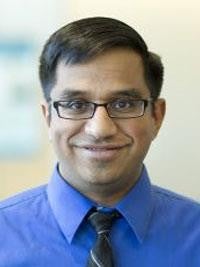 Because he got his colonoscopy, Fritsche got fast treatment. He underwent laparoscopic (keyhole) surgery to remove his cancer, followed by 12 cycles of chemotherapy to kill cancer cells that had spread.

“Chemo is really tough,” says Fritsche, now 53. “But everyone at Lehigh Valley Health Network’s (LVHN) Cancer Center was really nice and helpful. They always greeted me and offered me warm blankets. They even had service dogs that came around.

It’s a really comfortable atmosphere, and it helped to lift my mood.”

Now cancer free, Fritsche chose to encourage others to get tested. So he organized an awareness-raising bike ride in Allentown called the Tour de Tush. He quickly found support from local businesses, nonprofits and volunteer groups, including LVHN and Shah. “He’s the best doctor I’ve ever had,” Fritsche says. “He’s so supportive.”

Cyclists in the Tour de Tush ride through a 9-foot inflatable colon on their way to the finish line, where they are greeted by colon cancer survivors.

In two years, the event has attracted more than 400 cyclists and raised nearly $50,000 to benefit area colon cancer awareness programs. Now the ride is expanding to other areas of the country.

Most important for Fritsche: People are getting the message. “After the 2015 race, a volunteer told me he would get a colonoscopy,” he says. “They found stage 2 colon cancer. I visited him in the hospital. His wife hugged me and thanked me for saving his life. It made me want to do more, because who knows how many more people’s lives we can save.”