Thanks to LVHN’s Patient Blood Management Program, Hellertown Man Has His Leg and His Life Back

On a crisp January 2022 day, Scott Sexton, MD, approached the Chevrolet Suburban in the Lehigh Valley Hospital–Cedar Crest emergency room parking lot, not sure what to expect.

“I found a man lying on a mattress in the back of the truck,” says Sexton, an orthopedic surgeon with Lehigh Valley Orthopedic Institute. “He was in a lot of pain, so much so that I went out to examine him rather than have him try to come in.”

The man was 59-year-old Darren Grunstra, who had been badly injured in a motorcycle accident Sept. 21, 2021.

A turn for the worse

“A guy turned his car in front of me and I hit his front bumper,” Grunstra says. “I flew over his car and landed on the pavement about 50 feet away.”

Grunstra says he injured his back in two places, his pelvis, his hip and both legs. The health care facility where he was initially treated was able to take care of most of his injuries. But Grunstra would need surgery to repair a compound fracture of his left leg. The femur had been split into multiple pieces through to the knee joint.

That’s where his story took a problematic turn.

“The hospital where I was originally taken said they would not do my surgery without using donated blood,” Grunstra says. As one of Jehovah’s Witnesses, Grunstra has a faith-based objection to blood transfusions. “This stand didn’t seem to sit well with the surgeon at that hospital.”

Grunstra was given an external fixator, essentially a metal brace that’s attached by screws to the bone, to stabilize the joint. Sexton says it’s usually meant as a temporary solution. 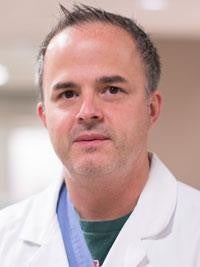 A turn for the better

“Three or four months went by, and I hadn’t heard anything about what we were going to do next,” Grunstra says. “Finally, the pain got so bad that I asked my brother Dave to drive me to the LVHN (Lehigh Valley Health Network) emergency room.”

“I immediately thought of Dr. Sexton,” Frinzi says. “He’s our go-to guy for really challenging cases. Darren had the brace on for so long, there was a chance the leg would need to be amputated. I was confident Dr. Sexton could perform the bloodless surgery Darren requested.”

“I still have a way to go before I feel like myself again, but I’m so grateful to Dr. Sexton and everyone at LVHN. I can play with my grandkids again. That’s everything.” - Darren Grunstra

How bloodless surgery is done

“We cleaned out and repaired the femur, removed and replaced the broken end of it, and performed a knee replacement,” Sexton says. “Darren knew we weren’t setting the bar too high considering how long it had been since the injury and that amputation was possible. But things have gone very well for him.”

In fact, things have gone so well Grunstra was able to return to work at his commercial painting company in mid-June.

“After months of physical therapy, I’m up to about 90 degrees of motion with the leg,” Grunstra says. “I haven’t needed any pain pills for some time now. I still have a way to go before I feel like myself again, but I’m so grateful to Dr. Sexton and everyone at LVHN. I can play with my grandkids again. That’s everything.”

Our Patient Blood Management Program is for people who wish to minimize or completely avoid the use of transfused blood during a procedure. We work directly with you and your care team to develop a personalized plan of care.