LaurieAnn Kapun realized something had to change one day in 2015 as she labored to walk from the restroom at work back to her desk. “I weighed 388 pounds, and when I sat down I was really winded,” says the 55-year-old Macungie woman. “I suddenly thought, ‘I’ve been heavy my entire life. I’ve tried so many diets, and they’ve never worked.  I have diabetes and hypertension, and I’m so tired after work I fall asleep on the sofa. I just can’t do this anymore.’”

On an impulse, she texted her husband, Jerry, to tell him she was seriously considering weight-loss surgery. Jerry, who also was overweight at 399 pounds and had hypertension, didn’t answer right away. She began to worry that he wouldn’t approve.

“After 20 minutes I finally got a text that said, ‘OK, maybe I’ll do it with you,’” she says. “I was shocked and actually started crying at work. I was so happy we were going to do this together.”

Jerry Kapun agrees the timing was right. “I realized that day I didn’t want to be heavy anymore,” he says. “I just sat around. I didn’t have energy and couldn’t even cut my grass without taking five breaks. It was time to do something.” 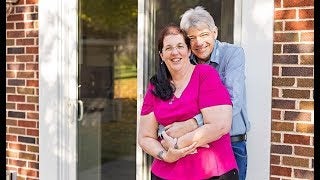 Speaking that evening was bariatric surgeon T. Daniel Harrison, DO, with LVPG General and Bariatric Surgery. The Kapuns immediately liked his down-to-earth approach, while LaurieAnn was particularly interested when Harrison spoke about type 2 diabetes, a condition she had developed.

“Diabetes control or resolution is one of the primary benefits patients with type 2 diabetes experience,” says Harrison. “A long-term study conducted by Cleveland Clinic  finds that over 88 percent of patients who had bariatric surgery will maintain blood sugar control without prescribed insulin.”

On Aug. 19, 2016, Harrison performed the gastric sleeve procedure, also known as sleeve gastrectomy, on the high school sweethearts. Jerry had surgery in the morning and LaurieAnn in the afternoon. The minimally invasive procedure is performed laparoscopically through small incisions in the abdomen to remove 75 percent of the stomach. This not only shrinks its size but also lowers production of the appetite-stimulating hormone ghrelin so patients fill up faster and feel less hungry.

“I stopped taking my diabetes medicine when I walked out the door of the hospital that day,” LaurieAnn says. “My blood sugar was perfect.”

And both Jerry and LaurieAnn have improved their blood pressure. “I’m off my hypertension medication, and Jerry has since gone down from three medications to one at a lower dosage,” she says.

There for each other

The Kapuns are grateful to their three grown children and the Weight Management Center team for helping them succeed so far. LaurieAnn still plans to lose another 58 pounds. The couple also credits their own supportive relationship forged over 34 years of marriage. “It’s not really the appearance I see. It’s more when I hold her. I just feel she’s so different. When I hug her, when I hold her in my arms, that’s when I really feel the difference. It feels great,” Jerry says. “I can’t imagine having done it without him,” LaurieAnn says.