Not much scares professional race car driver Kevin Kromer of Walnutport. But a diagnosis of esophageal cancer in 2016 did. “Your life just stops in front of you,” says Kromer, now 52.

Kromer could no longer swallow solid food, so he visited his primary care doctor to find out what was wrong. Next, he saw a gastroenterologist, from whom he learned he had a 9-centimeter, stage 3 tumor in his esophagus. 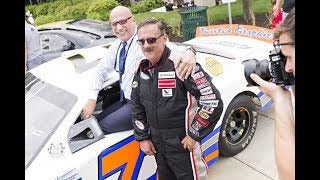 “Kevin received intensity-modulated radiation therapy (IMRT) as a pre-operative therapy to improve the chance Dr. Brodsky could remove the tumor entirely. IMRT allows us to spare his normal healthy cells but still deliver substantial dose to the tumor,” McIntosh says.

Kromer’s tumor was in his lower esophagus, affecting his stomach. That meant Brodsky had to remove a good portion of Kromer’s esophagus, plus part of his stomach, yet leave Kromer with the ability to eat as normally as possible.

“I do an aggressive resection because you have only one shot. I tell the patients three things: I want to make it a safe operation. I want to do the best cancer operation I can. And, I want to get the best functional result that’s possible,” Brodsky says.

Six weeks later, Kromer was eating pork chops, albeit smaller portions. There are two reasons for that. One, his stomach was smaller. And two, Kromer dropped 40-plus pounds and wants to keep it that way. “Dr. Brodsky wants me to stay around my high school weight,” Kromer says.

Even with a successful cancer surgery, Kromer’s treatment continues. He’s now in a clinical trial for nivolumab. “This is for patients with esophageal cancer with residual disease,” Khalil says. The “residual” part is because Kromer’s tumor was still present after chemotherapy and radiation.

Kromer’s involvement is for a full year, receiving infusions every two weeks to start, then monthly for the remainder of the trial. He has regularly scheduled blood work and computed tomography (CT) scans every three months. “His CT scans have been without evidence of disease recurrence or progression,” Khalil says.

Even after Kromer completes the clinical trial, Khalil will continue to follow up with blood work and CT scans every six months to monitor for cancer recurrence. “Sometimes we’ll get an early indication from a high calcium level or elevated liver function,” Khalil says.

What is Kromer’s prognosis for the future? “Kevin’s had successful treatment with chemotherapy, radiation and surgery, and there is the additional plus of the clinical trial,” Khalil says. “He is a motivated, hopeful and strong-minded person, and the outlook is good for him.”

Kromer also is very thankful. So much so that he wants to give back. Currently, his number 77 race car features the LVHN logo, and he is trying to raise funds for the cancer center.

He cheered up some younger cancer patients at LVH–Cedar Crest by bringing his race car to the campus and meeting with the children. Currently, he is working with a legal team to create a nonprofit that can further support the good work he wants to do with LVH–Cedar Crest.

“Kevin has an amazing attitude. I’m impressed with how he gives back to the community so soon after going through such intensive treatment,” McIntosh says.

“You just have to set your mind on something you want to do,” Kromer says, “and keep pushing toward that goal.”