COVID-19 Level Orange – What it means for you when you come to LVHN. Learn more >> 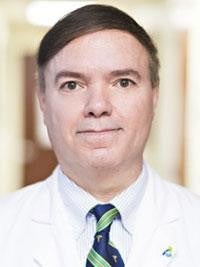 As an osteopathic physician, I am trained to treat the whole person, not just the symptoms. So I don’t just treat a runny nose but go beyond that to wonder why you’re having a runny nose and ask the right questions to find out if anything else is going on in terms of your lifestyle or environment. That’s the essence of osteopathic medicine.

Why I entered medicine

I have always had a love for science and a desire to intervene and advocate for the health of others. It’s something that’s been with me as long as I can remember. While growing up, I was always impressed with the ability of our family physician to intervene during our illnesses, make us feel better and improve the lives of everyone around us.

I am an active participant the Navy and Marine Corps community, as a now-retired lieutenant commander in the Navy and a general medical officer with the Marines. During that point in my career, I lived in San Diego and was stationed there for a number of years. I was also a member of the Fleet Marine Force, which travels the western Pacific and is involved with overseas activities throughout Asia in places like the Philippines, Hong Kong, Korea and Australia.

I continue to help support the community and recreational service center in San Diego. It’s a place where Navy and Marine Corps personnel can go for relaxation and recreation while on leave. I am involved with things like purchasing table tennis equipment and supporting extracurricular activities.

I’m interested in artificial intelligence and its relationship to health care, and also collaborate with several other individuals who are involved with setting up neural networks and programming computers or other computational devices. We all have backgrounds in computer programming, which I studied on the side and through electives in college, and we’re creating many of the algorithms that are employed in artificial intelligence. We’ll see if our hobby becomes something more of an entrepreneurial business. I’m also interested in general health and fitness, and have completed marathons.

About Our Ratings and Reviews

Our physicians and advanced practice clinicians (CRNPs and PA-Cs) are among the nation's best. That's why we show you patient satisfaction ratings and comments so you can read about and get to know our providers through the eyes of their patients.

To ensure our ratings and comments come only from verified patients, we work with NRC Health, a third-party organization. NRC Health sends patient satisfaction surveys on LVPG's behalf following an office visit or procedure. They ask patients about their impression of the health care provider and the doctor's or advanced practice clinician's communication skills.

What is included in the star rating?

Star ratings are based on a scale of 1-5 stars, 5 being the best. The rating includes responses to these provider-related questions:

Why don't all doctors or advanced practice clinicians have a rating?

In order to have enough data to measure and compare, a health care provider must have at least 30 completed patient satisfaction surveys. Surveys are included for a period of 12 months from submission.